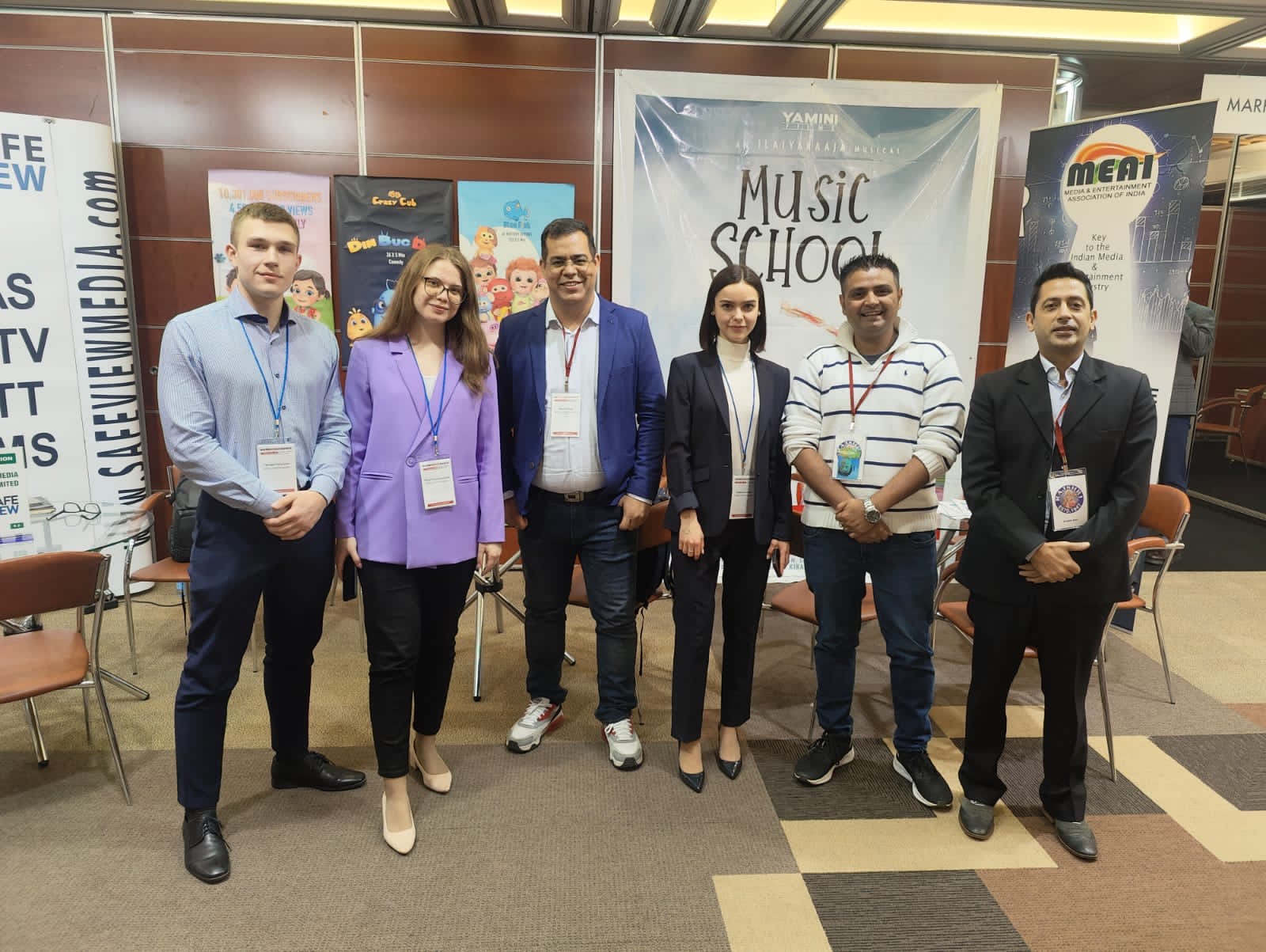 Media & Entertainment Association of India (MEAI) set up India’s first national pavilion at the World Content Market, Moscow from 8 – 10 November, 2022. The World Content Market, Moscow is an annual event that brings together key TV channels, digital platforms, production and distribution companies, and international sales companies from Russia and the CIS region to network, make deals and learn about new developments in the industry. Over 1,000 participants representing 400+ companies from various nations and regions attended this year’s event. Companies from Russia, Belarus, Kazakhstan, Uzbekistan, Kyrgyzstan, Armenia, Turkey, Saudi Arabia, the United Arab Emirates, India, and Iran were among the eclectic mix of attendees and participants at the event.

The event featured a range of activities, including panel discussions, pitch sessions, and networking events. Attendees had the opportunity to hear from industry experts and learn about new trends and technologies. There were also official pitch sessions for new animation projects from leading animation companies. The return to an in-person format after a break due to the COVID-19 pandemic was particularly welcomed by attendees, who were able to connect and conduct business in person rather than relying on virtual meetings. This added a level of personal interaction and engagement that was much appreciated by all.

MEAI delegation comprised Ankur Bhasin (Secretary, MEAI and CEO Bhasinsoft), Kamal Pahuja (MC Member, MEAI and CEO Crazy Cub Animation), and Karhun Nanda (CEO SafeView Media). Mr Ranjit Mohanty, AAO NXT joined the delegation virtually through the online participation. Mr Bhasin commented on the timing for India’s first national pavilion at the event. “This was our first time participating in this particular market, and we have been eager to learn more about the needs and interests of the local audience in the CIS region. There is a significant demand for content in this market currently, particularly with the vacuum created by US and European companies leaving the country. This is what pushed us to create an opportunity for our members and delegates to leverage upon.” MEAI also put together a focus on India panel that focussed on fresh content from India showcased by MEAI Secretary Mr Ankur Bhasin. Some of the content presented included Udariyaan and Bepanah (drama series from the catalogue of IndiaCast), a showreel of AAO NXT (an Oriya OTT platform) and Slick Rick (a 3D non verbal animated feature film). The panel’s highlight was a 12 minute screening of a new Indian musical film called “Music School,” directed by Paparao Biyyala and produced by Yamini Films. The film is a heart-warming musical, the music of which is given by legendary musician Illayraja, and explores how the prevailing Indian education system and pressure from parents to be competitive can leave no time for art and culture. The film received a lot of interest from attendees.

The market proved successful for the delegation. Mr Bhasin commented, “We signed an MOU with a Russian company for worldwide representation of their unreleased melodrama feature. We have also tied up with another company to represent their sci-fi time travel series. On the selling side, it was one of the best markets with buyers lining up to meet us. Overall, the market was extremely fruitful for both buying and selling content.” Mr Pahuja echoed the experience, “We were quite happily surprised with the outcome of the participation. We are about to sign a co-production deal and will definitely look forward to participating again.”

Rajshri Entertainment, represented by Mr Rohit Bohara, Vice President, Business Development, and Mr Steven Davis, Manager – Content Licensing & Syndication, also participated in the market. Since it was a new market for them as well, their focus was on building relationships and opportunities in Russia. Rajshri brought a diverse set of content, consisting of films, kids’ animations, food shows, and wellness shows and since then have already seen conversions on the meetings.

With results on hand, MEAI aims to make World Content Market, Moscow an annual participation and have already announced the next India pavilion at the summer edition (29 – 31 May, 2023). With a more concrete strategy for the next participation and continuing to explore the potential of this market, MEAI aims to further open the CIS markets for its members and delegates.

No comments to show.